Traffic jams. Automatic flush sensors. Sharp plastic packaging.
Who’s behind it all?
Hold on to your tin-foil hat and beware the alligators
as you explore a sewerload of absurd conspiracies.

Granola mom Lynn Grady is on assignment as restaurant critic Our Zen Gourmet when a hostile phantom voice invades her head. A stranger appears and, after blocking the voice with an improvised tin-foil hat, recruits Lynn for a hydroponic-farm-to-fork tasting gig. But a surprise attack by armed French waiters plunges her into a high-tech underground war—against her grunge-star ex‑husband—with her teenage daughter at stake. Lynn learns that urban legends are not what they seem as she uncovers a pervasive (and entertainingly plausible) consumer products conspiracy.

The Urban Legion warps your world in a funhouse mirror.
Food courts and airport restrooms will never be the same.

Buy the book now on Amazon in paperback or Kindle! 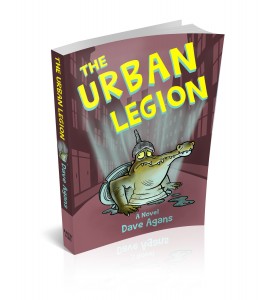